The transcript of the purported chat between Goswami and the former BARC chief is part of the Mumbai Police chargesheet in the TRP scam case.

“Bigger than a normal strike.”

That is what Republic TV Editor-in-Chief Arnab Goswami told Partho Dasgupta, the former Chief Executive Officer of the Broadcast Audience Research Council , which measures television ratings, in a purported WhatsApp chat on February 23, 2019.

Three days later, on February 26, 2019, the Indian Air Force carried out a strike targeting a Jaish-e-Mohammad training camp in the Pakistani town of Balakot. The attack was billed as India’s response to an attack on February 14, 2019, in Pulwama in Jammu and Kashmir, in which 40 Central Reserve Police Force personnel were killed after an explosive-laden car driven by a suicide bomber rammed into their bus.

The purported chat is mentioned in a transcript that is part of a 3,400-page supplementary chargesheet filed by the Mumbai Police in their investigation into the alleged Television Ratings Point scam, according to The Hindu.

The chats, alleged advocate Prashant Bhushan on Twitter, “show many conspiracies & unprecedented access to power in this” government.

These are a few snapshots of the damning leaked WhatsApp chats between BARC CEO & #ArnabGoswami. They show many conspiracies&unprecedented access to power in this govt; gross abuse of his media&his position as power broker. In any Rule of law country, he would be in jail for long pic.twitter.com/6aGOR6BRQJ

According to the transcript, on February 23, 2019, Goswami texted Dasgupta saying: “On another note something big will happen”.

After a few messages on other matters, Dasgupta asked, “Dawood?”, referring to the notorious gangster who is wanted in several cases.

Arnab Goswami: “No sir Pakistan. Something major will be done this time.”

Arnab Goswami: “It’s good for big man in this season.”

Partho Dasgupta: “He will sweep polls then.”

Arnab Goswami: “Bigger than a normal strike. And also on the same time something major on Kashmir. On Pakistan the government is confident of striking in a way that people will be elated. Exact words used.” 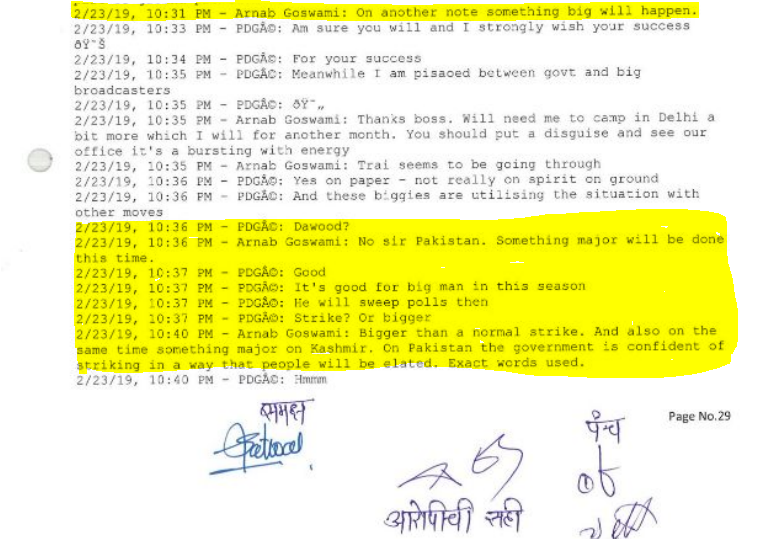 An operation to manipulate television ratings was uncovered in October when the Broadcast Audience Research Council filed a complaint through Hansa Research Group, one of BARC’s vendors, accusing some channels of rigging their ratings by bribing some households to watch their programmes.

On December 25, Mumbai Joint Commissioner of Police (Crime) Milind Bharambe had said that a forensic audit report of the rating agency’s data had revealed that the numbers had been manipulated at least since 2016. Bharambe said that the manipulations resulted in Republic TV being depicted as the top-ranked channel.

Bharambe had also mentioned that the report mentioned e-mails and chats between officials of the rating agency that were “absolutely incriminating”.

Earlier this month, Mumbai Police informed the Bombay High Court that they have found more evidence against Goswami in relation to the case.

Thirteen people have been arrested in the case so far, including Republic TV Chief Executive Officer Vikas Khanchandani. He has since been released on bail.

Box Cinema and Marathi channel Fakt Marathi were the other channels named during the preliminary investigation.

Nooralhaq Nasimi: I wish to work with India to improve Afghanistan