A two-minute video, shot apparently by a patient admitted at the state-run Uttar Pradesh University of Medical Sciences in Etawah’s Saifai village on Saturday, shows garbage piled up in the hospital corridor and washrooms.

Etawah, Uttar Pradesh: A hospital in Uttar Pradesh’s Etawah district – about 224 km from state capital Lucknow – was inspected by a senior government official on Sunday after a video that was widely shared on social media sparked criticism about poor hygiene at the hospital where coronavirus patients are being treated.

A two-minute video, shot apparently by a patient admitted at the state-run Uttar Pradesh University of Medical Sciences in Etawah’s Saifai village on Saturday, shows garbage piled up in the hospital corridor and washrooms. The patient was reportedly transferred from Agra in western UP, 116 km away.

“Coronavirus patients should be kept separately, however, these norms (for social distancing) are not being followed here. How will the patients recover?” a man is heard asking in the clip as he records the video.

“We can’t recover here. It seems we have been brought here to die. For a total of 40 patients, only two washrooms are here – one for men, another for women. These washrooms are extremely dirty. You can see garbage lying all around,” he says as he shows the patients lying on hospital beds next to each other in two rooms and then enters a washroom. 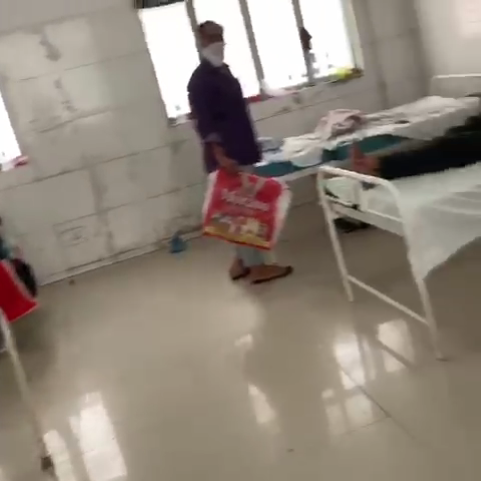 Visuals show empty plastic bottles lying on the floor, yellow garbage bags stacked up against each other and overflowing dustbins.

“No one has come to clean this mess even once. There is a mop lying right next to the taps at the water cooler,” the man is heard saying.

On Sunday, a senior state government official visited the hospital to review the lack of facilities.

“There are shortcomings. The Vice-Chancellor of the university told me that the areas are cleaned just once a day. So I have directed that it happens twice a day. The second thing is that food is not being given on time to the patients. I have asked the Vice-Chancellor to ensure that the food is supplied on time,” said Rajaganapathy Raju, an IAS officer posted in Etawah.

The video was shot two days after at least 69 COVID-19 patients waited for nearly an hour outside the locked gates of the same hospital. The patients were transferred from Agra by a state-run bus.

The doctors and other hospital staff later scrambled to admit them to a dedicated COVID-19 ward.

Last week, doctors and paramedical workers treating COVID-19 patients in Rae Bareli district were relocated by the state government on Wednesday night hours they released videos highlighting filthy living conditions at a quarantine centre set up in a government-run school.