ANKARA: Andrei Karlov, the Russian ambassador to Turkey has been shot dead by a police officer who shouted “Don’t forget Aleppo” as he shot the ambassador dead.

The shocking attack on Monday evening, which was captured on video, appeared to be a backlash against Russian military involvement in the Syrian civil war.

Andrei Karlov was attacked at the opening of an art exhibition in Ankara by a man believed to be an off-duty Turkish police officer. Karlov was several minutes into a speech when he was shot. Footage of the attack showed a man dressed in a suit and tie standing calmly behind the ambassador. He then pulled out a gun, shouted “Allahu Akbar” and fired at least eight shots.

After firing at the ambassador, the man shouted in Turkish: “Don’t forget Aleppo. Don’t forget Syria. Unless our towns are secure, you won’t enjoy security. Only death can take me from here. Everyone who is involved in this suffering will pay a price.” 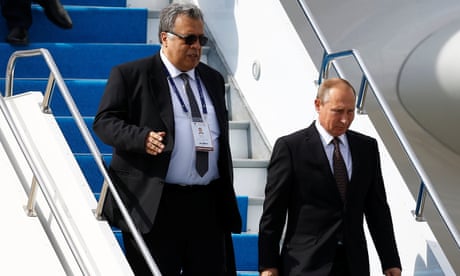 The Russian president, Vladimir Putin, called the killing a “provocation” aimed at sabotaging a rapprochement between Moscow and Ankara and attempts to resolve the conflict in Syria.

“The crime that was committed is without doubt a provocation aimed at disrupting the normalisation of Russian-Turkish relations and disrupting the peace process in Syria that is being actively advanced by Russia, Turkey and Iran,” he said in televised comments.

Putin said: “There can be only one answer to this – stepping up the fight against terrorism, and the bandits will feel this.”

Putin said that Russian officials would be dispatched to Ankara to investigate the killing. “We have to know who directed the hand of the killer,” he said.

His comments were echoed by Russian foreign minister Sergey Lavrov who said, following a phone call with his Turkish counterpart, Mevlut Cavusgolu, that those behind the shooting “were seeking to derail the process of normalising Russia-Turkey ties primarily with a goal to prevent an efficient fight against terrorism in Syria.”

China calls balloon incident a setback for ties with US